So, i’m on the road, finishing up OR – great people, I don’t care what Idaho says about them. I thought I’d share a transcript of tonight’s show, even though it hasn’t happened (hey, that’s how showbiz works, man):

(MC brings me on stage, gets my last name wrong).

Hi. Hey, thanks MC for getting my name wrong. Good one. There is no L in my name, moron. What? No, I’m just saying, you got my name wrong. No, don’t come back up here. No, don’t. Okay, I didn’t mean anything by it. Just, please don’t get my name wrong again, if you don’t mind. I’m sorry. I said I was sorry.

(to audience): Good to be here, Chicago!

Ahhh, just kidding. Or j/k, whatever. What’s up with Portland? Are there enough bridges here, or what?

Could it be any duller here? Hello? (to audience member): What?

Yeah, I’m getting to the jokes. Just chill out – not my fault you only had enough money for one beer. Eat some chips and check your cell phone. I’m sure you have a lot of calls coming in.

Okay, so I like coming here to Oregon cuz I like to say “Lake Oswego.’ Lake Osweeeeeeego.

Hmmmm….this seems like a good crowd. I was at a show recently in California and all they wanted to hear were jokes about celebrities. And really the only celebrity impression I do is that kid from “Eight Is Enough.” Or was it from “Different Strokes?” I dunno – I get them mixed up but here goes:

Can someone give me the light back there? (no response).

Okay, anyway. What was I saying? Oh, yeah. I’m from wine country? When I told my grandma that I worked in wine country, she said she worried about me living in a foreign land. I said, ‘it’s not like that Grandma – you should visit me’ and she’s all ‘I can’t, I don’t have a Visa’.

Thank you, thank you, but this isn’t a word association game. You know, I don’t hear that too often, the whole heckling thing. Nowadays, when someone feels like heckling, they just text message it to their friends. But I see you’re alone, so you’re forgiven.

ha ha ha – did you think I’d really post a transcript of my set – that’s like giving away the store, man. I’m on the road to do comedy – I ain’t out here, driving around and getting lost and too afraid to ask for directions and working hard only to just post stuff. Hey, if you want free comedy stuff, go to YouTube, where there are millions of hilarious comedy videos.

Okay, so I’m off to Washington this weekend to do a three night gig in the city. It should be a good ol grungy time. I don’t think Washington folks are tired of the word ‘grunge’ – I hope not.

Well, I made it to Oregon. I ditched my bluetooth headset as soon as I crossed the state line. It feels great to be back to hands-tied-cellphone usage!

I’ll be doing a show tonight. Now, I’ve never been to Oregon, but I understand they don’t pay state taxes and they like trees. They’re like rich Ewoks. Should be a good starting point.

By the way, I’m already getting a lot of questions about what I’m using to blog this trip from the road. I use OLPC laptop (from the One Laptop Per Child program). This program works to get cheap but useful computer machines into the hands of third-world country kids. I got mine by setting up a PO Box in Port Harcourt, Nigeria, under the name Ethan Hunt. I put a note on the PO Box for UPS to redirect shipment to California. 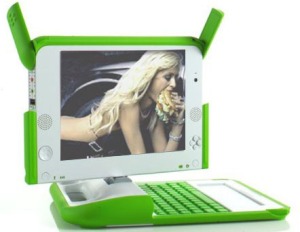 I’m a little bummed that it didn’t come with a mouse.

As a road comic, you sometimes fall into bad eating habits. Maybe you survive on whatever a 7-11 store can offer (warm burritos, old hot dogs), or you eat rice for several days. It’s tough out there on the road.

Today I had a summer dish of  horseradish crusted salmon medallion with dilled cucumber and mustard sauce. I know, I know – paired with a glass of 2001 Betts & Scholl, it wasn’t exactly my ideal. But if I am going to make it in this business, and tour, I have to sometimes be served this kind of cuisine. I’m sure things will improve as I reach Oregon for the secret show.

I’m halfway to Oregon. So far, my 2008 comedy tour is going pretty well, although I haven’t performed any comedy yet. That will be tomorrow night where I will perform to a sell out crowd at an open mic at a ‘secret show’ in south Oregon.

What else? Oh – I was pulled over today by the California Highway Patrol – I was recorded doing 75 mph in a In-N-Out drive-thru lane.

Also, as you may notice, I don’t do a lot of links on this site, because I’m just too busy thinking of jokes and reading.

I’ve read some journals and articles about ‘comedians’ on the road and they all sound very fun and exciting (those crazy club managers!) but apparently, cultural identity is very important for comedians! Who knew?

In no particular order, here’s a few:

The Black Comedy Tour, The Blue Collar Comedy Tour, Axis of Evil Tour, Religious Comedy Tour, or [deleted by editor because the guy who wrote this doesn’t think things through]. It goes on and on. And I’m sure they’re all hilarious. Yep.

Lesson learned: If you want to stand out in comedy, join a group of similar comics and perform to like-minded people. Repeat after me: “We’re All Individuals”

I didn’t think of this before I left, but if I had to call my ‘tour’ anything, I would just call it “The Mark Wiberg Kickin’ Ass and Taking First and Last Names If You Don’t Mind Tour!”.

so i finish this one show last saturday night at the Grange in San Luis Obispo, and do well, everybody laughs (good!) and these people come up to me after the show and ask if I want to do a road tour around the country, and I’m like ‘yeah’ but then I say ‘which country’ just to make sure they’re not messing with me because one time I was asked to perform at a New Mexican nightclub and I thought they meant “a night clubin New Mexico” (the state) but it turned out they meant “a new night club in Mexico!’ and it took several People’s Courts appearances to sort it out. So, back to SLO and the people offering me a chance to tour the world. “These United States” they say and I almost hear the Battle Hymn of the Republic in the background, it’s that wonderful. So, after a couple of hours (cross the Is, dot the Ts sort of thing), it’s decided that I will go around this country, telling jokes in as many places. very cool. And I’ll be paid in very classy, commemorative collectible 9/11 bills. I was gonna argue for Pocahantas gold coins, but I didn’t want to push my luck. I’ve seen the commercials and those 9/11 bills are pretty sweet! Who wouldn’t be impressed if I rolled up to a parking valet, and say ‘keep an eye on my Honda, dude, and this very fine collectible bill will be yours.’ I’m not sure how they make change for those. All I know is that after this tour is done, I will be loaded with collectible bills that promise to increase in value someday.

So, anyway, this morning I go to work today, explain it my bosses and tell them that I can do my job from any computer and they are all ‘go for it, we’ll still pay you! Go do you want you want to do!! Just email us once in a while’ and so I leave tomorrow to cover the Northwest. I tell them about how I’m gonna be paid in collectible bills originating from Africa and they say that sounds like a swell plan because everyone knows the US dollar is down. I agree. I’m not economist, but I manage my credit card debt better than most. A lot of people I don’t know don’t have credit card debt because they don’t have credit cards so they know less than me.

So the plan is for me to take my stand-up comedy act to the Northwest states like Oregon, Washington. I leave later this week and will post all my (mental) adventures.

Mark Wiberg is the author of these posts. They're meant to be humorous and/or informative. Don't get riled up! If you need to reach him, try markw24 at gmail dot com